BROKEN: Sickening prosecution of the Bundy family reveals the deep corruption and dishonesty of federal prosecutors 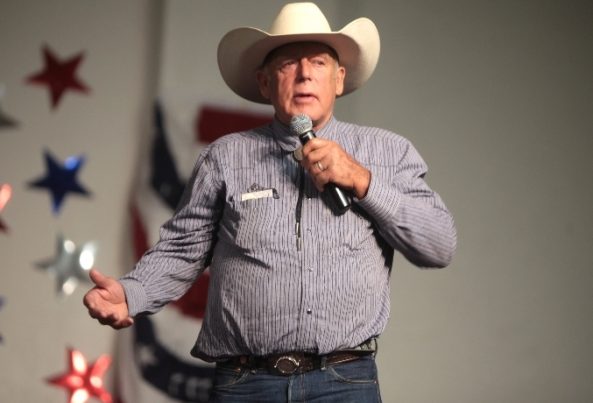 Long-time readers know through our coverage of Nevada rancher Cliven Bundy that the corrupt Justice Department recently tried to railroad him in an effort to throw him off a ranch that’s been in his family since the late 1800s.

The effort was unsuccessful, but that doesn’t mean the Justice Dept. has learned any lessons.

In December, U.S. District Judge Gloria Navarro dismissed the case against Bundy and others after declaring a mistrial over charges levied against him by the federal government in 2014. Then, the Bureau of Land Management accused him of violating a 1993 agency ruling which changed grazing rights in order to protect the desert tortoise.

She threw out the case because federal prosecutors hid exculpatory evidence from Bundy’s defense team until trial — a blatant violation of the Brady rule, which addresses suppression of evidence against a defendant.

If that wasn’t bad enough, in recent weeks federal prosecutors implored Navarro to reverse her earlier decision and allow them to proceed with their actions against Bundy, demonstrating the level of corruption that has utterly destroyed the DoJ from the top down.

As reported by The Daily Caller:

A federal judge rejected prosecutors’ request Tuesday to reconsider her dismissal of the case against Nevada rancher Cliven Bundy, his two sons and friend Ryan Payne.

The prosecutors’ request did not make any new arguments or bring forth any evidence that Navarro had not already considered in her decision to dismiss the case.

That is an astounding rebuke of federal prosecutors, who are generally deferred to by federal court judges and who even at times appear to run trials.

“The Court gave somber consideration to the ramifications of its Order and found that it was in the interest of justice to dismiss the case with prejudice,” Navarro wrote. “A motion for reconsideration should not be ‘used to ask the Court to rethink what it has already thought.’”

Prosecutors argued that prior actions and legal violations were merely “inadvertent.”

But of course, they weren’t.

Navarro ruled in December when she first declared a mistrial that prosecutors violated defendants’ civil rights after withholding about 3,000 pages of documents and some video materials.

“There were approximately 3,000 pages that were provided to us only after we started trial,” Bret D. Wipple, one of Bundy’s lawyers, told The New York Times.

Among the exculpatory evidence the prosecution failed to turn over was a video taken from within the Bundy range during the standoff by a federal informant, evidence that the FBI had agents involved in the standoff, and a threat assessment of the Bundys that the government drafted.

In addition, an assessment by government officials that the Bundys were not considered to be violent people was also withheld from the court.

Attorneys for Ryan Payne had made a request July 5, 2017, in an email to prosecutors that they turn over all threat assessments from a 2014 standoff with federal agents on Bundy land. Prosecutors characterized the Bundy team’s attempt at discovery as one of a “long list of frivolous and vexation pleadings.” So prosecutors decided to withhold those assessments until they actually had the defendants in court. (Related: ALL charges against Nevada rancher Cliven Bundy DROPPED after judge tosses case over ‘flagrant misconduct’ by FEDS.)

“The court finds that the universal sense of justice has been violated,” she wrote. She also said it became clear that the FBI was indeed involved in the prosecution and that it was no coincidence that most of the evidence was not turned over — because it was favorable to the Bundys.

It was bad enough this good family was abused by an out-of-control federal ‘justice’ system. It is outrageous the same corrupt system once again attempted to ensnare them.

J.D. Heyes is editor of The National Sentinel and a senior writer for Natural News and News Target.