Jeff Sessions is not serving up the justice that Trump and the American people deserve on Comey, Clinton, and others 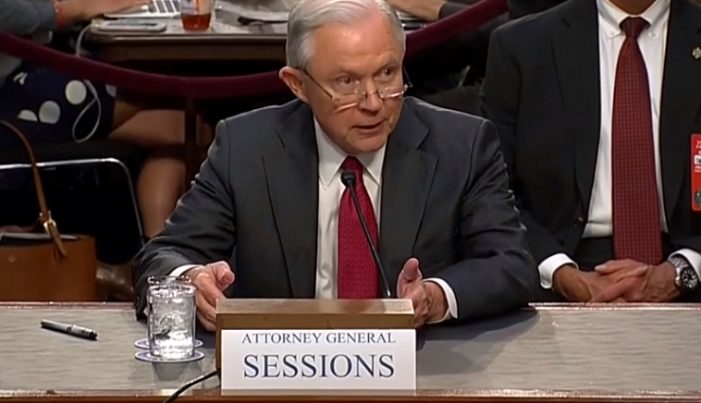 Right off the bat I want say that I think, personally, Attorney General Jeff Sessions is a decent and honorable man who is nothing like the person he has been made out to be by malcontents, miscreants, psychopaths, and fools in the Democratic Party and the Left.

But niceties aside, we have a republic to save.

I no longer believe that he’s capable of serving in his current capacity as the second-highest ranking law enforcement official in the country behind the president. I’ll explain.

Long before Donald J. Trump won the November election and was sworn in as our 45th president, evidence existed that Hillary Clinton, former FBI Director James Comey, former Attorney General Loretta Lynch, and former National Security Advisor Susan Rice were complicit in crimes against the state as well as crimes against the American people.

As noted by Gregg Jarrett, a Fox News legal analyst and former defense attorney, Sessions has taken no actions whatsoever to right the wrongs that are now so plainly evident, just based on open source reporting, as to make him seem unworthy, incompetent, or incapable of carrying out his duties as head of the Department of Justice.

And frankly, if the American people cannot trust the Department of Justice, there is nothing left to defend in this republic, for the rule of law will have completely broken down.

Consider these actions that Sessions has thus far — months into his tenure — refused to address:

— As Jarrett notes, Sessions has resisted efforts to produce documents that are relevant to the bogus, discredited — and likely Democrat-and-FBI affiliated — “Trump dossier” that have long been subpoenaed by the House Intelligence Committee. (Related: CNN, BuzzFeed Caught Running Fanfiction Erotica Message Board Fantasies As “Intelligence Dossier” To Slander Trump… “An Absolute Disgrace” Says President-Elect.)

— He has yet to appoint a special counsel to reopen the investigation into Clinton’s improper use of a personal, unsecured email server over which reams of classified information passed — all likely violations of the Espionage Act.

— He has ignored Clinton’s obstruction of justice over her deleting 33,000 emails that were under congressional subpoena — emails that likely would show she was engaged in “pay-for-play” using her role as secretary of state to extract millions in donations from foreign donors who assumed they’d be dealing with her in the Oval Office instead of Trump.

— Sessions has to date taken no action against Rice for her improper unmasking of American citizens tied to the Trump campaign and who were under surveillance by the Obama administration.

“Evidence continues to mount that the incoming president was spied upon for political reasons,” Jarrett writes. “Transition officials were unmasked, perhaps illegally. And in one case, the unmasking was leaked to the media which is a crime. Yet Sessions is twiddling his thumbs.”

Then, of course, there is the possibility that Comey has also violated not just Justice Department and FBI rules, but also may have perjured himself before Congress, which is also a crime. He also appears to have stolen government documents and then leaked them to the media (all with the intent of having his friend and former FBI director, Robert Mueller, appointed to investigate Team Trump).

“Jeff Sessions may have been a fine senator, but he has proven to be a feckless attorney general,” says Jarrett. “He should resign. But before he does, he can attempt to rectify the wreckage he has wrought by initiating several necessary criminal investigations and/or appointing a special counsel to do so.”

Here is just one more example of the lawlessness:

— Under oath, Comey was asked by the House Judiciary Committee whether he decided not to recommend criminal charges against Clinton before or after he interviewed her. He replied, “After.”

And yet, a document has been uncovered by the Senate Judiciary Committee revealing that two months before the FBI interviewed Clinton and her top aides Comey drafted a statement exonerating her. “Absent some extraordinary explanation,” Jarrett notes, “it appears that Comey’s investigation of Clinton was nothing more than a charade and that he may have even lied under oath.”

There is more afoot here than just an effort to delegitimize Trump. The Deep State wants to completely destroy him, financially and otherwise, as a warning to any other ‘outsider’ who thinks he or she wants to be president. And that warning, simply, is, “Don’t.”