SHOWDOWN: Mueller expands his probe into Trump business dealings after president warned him to stick to Russia only 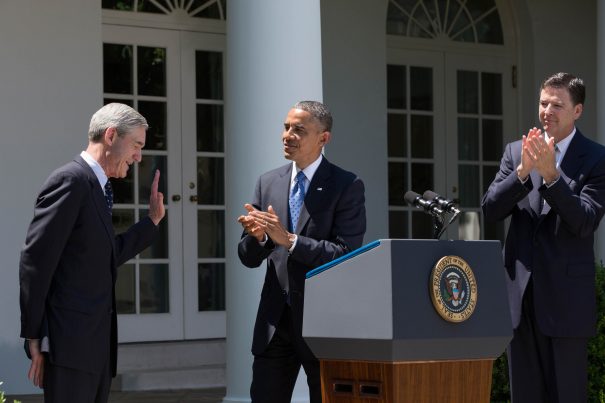 It’s no secret that President Donald J. Trump is sick and tired of the ongoing “Russia” investigations – by Congress, by the Justice Department, and by the DoJ-appointed “special counsel” Robert Mueller.

In an interview with The New York Times this week, Trump made his irritation plain when he told editors and reporters that if he had known ahead of time that early campaign ally Jeff Sessions would, as one of his first official acts, recuse himself from all matters related to the Russia investigations, the president would never have nominated him.

In the same interview, Trump was asked whether he would ever fire Mueller, and if so, under what circumstances. This is where it is now getting interesting. The Times reported:

Mr. Trump said Mr. Mueller was running an office rife with conflicts of interest and warned investigators against delving into matters too far afield from Russia. Mr. Trump never said he would order the Justice Department to fire Mr. Mueller, nor would he outline circumstances under which he might do so. But he left open the possibility as he expressed deep grievance over an investigation that has taken a political toll in the six months since he took office. [Emphasis added]

When he was asked if Mueller’s investigation would go a step too far if it began examining Trump family finances beyond any relationship to Russia, the president was much more specific.

“I would say yes,” Trump responded, though he did not clarify what he might do about it. “I think that’s a violation. Look, this is about Russia.”

Well, that red line may have just been crossed.

Bloomberg News reported Thursday that Mueller has, in fact, expanded his investigation into just that aspect of Trump’s personal life:

The U.S. special counsel investigating possible ties between the Donald Trump campaign and Russia in last year’s election is examining a broad range of transactions involving Trump’s businesses as well as those of his associates, according to a person familiar with the probe.

This comes on the heels of the president, less than a day earlier, telling The Times that such a probe would be out of bounds. Are we about to see a showdown between a president clearly fed up with the Russia nothing burgers and the Deep State’s operatives – Mueller being one of them?

By all rights the president, as head of the Executive Branch and all its various agencies – which includes the Justice Department, whom Mueller works for – has the authority to fire the special counsel, for any reason or for no reason. But if he does that, the political fallout would be immense.

Democrats and not a few Republicans, all of whom have repeatedly touted Mueller’s reputation and supposed independence, would scream “obstruction of justice” from every corner of the nation’s capital. Pretty much all mainstream media outlets would use the firing to once and for all “prove” the Trump-Russia “collusion” narrative they’ve been pushing for months. It may be that Trump could not survive politically.

To Trump’s legion of political enemies, on the surface, there is a Trump business empire connection to Russia: financing deals, buildings and the 2013 Miss Universe pageant, which Trump used to own. To his critics, those ties alone are “proof” of “collusion.”

So, less than a day after the president warns Mueller to stick to his real mandate – investigation of Russian interference in the 2016 presidential election – word breaks that he’s already begun looking into Trump corporate financial dealings with Russian entities.

And now a showdown is brewing, which leads to this question: Was this all a setup from the beginning?